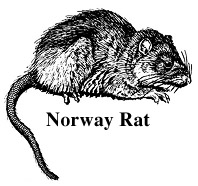 The Norway Rat, or brown rat, lives both as a commensal in close association with man and in the feral state, chiefly where vegetation is tall and rank and affords adequate protection. As a commensal this rat lives principally in basements, on the ground floor, or in burrows under sidewalks or outbuildings. They appear to be most common about feed stores, chicken houses, and garbage dumps. Although more at home on the ground, these rats are adept at climbing and have been observed traveling along telephone wires from one building to another. In places they become exceedingly numerous and destructive.

They feed on a variety of items including both plant and animal materials. All sorts of garbage appear to be welcome, but their main stay is plant material. Grains of various sorts are highly prized. When established around poultry houses, they feed extensively on eggs and young chickens. They even have been known to kill lambs and young pigs!

These rats are prolific breeders. The gestation period varies from 21 to 23 days and the number of young from two to 14, averaging seven or eight. At birth they are blind, naked, and helpless. They grow rapidly; their eyes open in 14-17 days and they are weaned when 3 or 4 weeks old. There is no delimited breeding season, but there is a tendency for a slow-up in reproduction during fall and winter. The life span is reported to be 2-3 years.

Although these rats are preyed upon by a number of animals including the spotted skunk and the barn owl, as well as house cats, these predators often are not able to keep the rat population in check. Considerable destruction of property and foodstuffs can take place where rats are abundant. In addition, they constitute a menace to public health. They are known to be reservoirs of bubonic plague (transmitted to man by the bite of a flea or other insect), endemic typhus fever, rat bite fever, and a few other dreaded diseases. Because of this it is commonly said that Norway and roof rats are more dangerous than lions or tigers! Every effort should be made to exterminate them when they are found on your premises, and it is advisable to rat proof garbage cans and all buildings to prevent their entrance.