San Diego, CALIFORNIA — One of life’s age old problems is getting and staying organized. An inventor in San Diego, California has an easy and fast solution in a patented product called the Presto Purse, a purse insert organizer.

Maurie Sandler, Founder of MSGlobal, says the product was developed after listening to family members complain about the amount of time it took to change purses and how they could never quickly find anything in there. They wanted a way to both ORGANIZE their DIFFERENT PURSES and to CHANGE THEM QUICKLY to match their wardrobe or their activities.

There are over 20 pockets in the Presto Purse Organizer to neatly store EVERYTHING you want to carry PLUS 2 SECRECT POCKETS!

For SECURITY each side of the pocketbook organizer  SNAPS closed to keep it all in place. 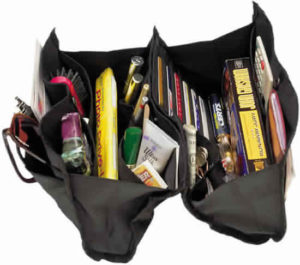 “If you have ever emptied your purse trying to find something, fumbled for a pen or exact change while in a checkout line, or maybe just wanted to change purses to match your outfit, but didn’t want to go through the bother, you will see the need for this product”, says Sandler.

The purse insert and organizer is made of light weight nylon and has compartments to store items such as keys, pen/pencil, makeup, coupons, wallet, credit cards, money, glasses, phone, address book, and many other items.

The Presto Purse insert and organizer is not actually a purse itself (though it could be used as one), but rather an organizer that goes into an existing purse. It is really two organizers in one joined in the middle by Velcro.

To use in an open style purse, you keep the two organizers joined.

To use in a split style purse, separate the two organizers, putting one half in one side and the second half in the other side of the purse“.

Our customers are thrilled with the product, Maurie says, because they can choose any purse they like (medium to large size) in any color they want, whenever they want, to put the organizer into. Best of all, it takes only seconds to change between purses.

DR. Michelle K, one of our customers, claims that she actually changed purses in 2 1/2 seconds, but she admits that it took a little practice”.

“Purses that are just organizers are very popular today. Just look at all the choices you have in the stores, says Maurie. The complaint that I hear most often about them, is that you are restricted to just that one style of bag, size, and color. Even if you like that one particular organizer purse, you still have to pull everything out of it when you change pocketbook”.

The Presto Purse insert organizer has been a CUSTOMER FAVORITE for a while now, and we still get letters from prior customers praising the product. One customer, Karen Hansen of San Francisco, California wrote, “I always lose my keys. Since I purchased the Presto Purse, I haven’t lost my keys once. I just put them in the same compartment all the time”. Another customer wrote that she actually changed purses 3 times in one day, and that it took her under 15 seconds total time. She has since purchased one for every one of her children and some of her friends as gifts.

The Presto Purse Organizer is the PERFECT organizer for my MANY purses. I love how you can split it in half for my smaller bags!

The Presto Purse Insert Organizer from M. S. Global is available by: